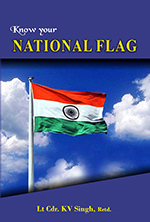 Independent India's National-flag, the Tiranga, came into existence on July 22, 1947. Pandit Jawaharlal Nehru described it as 'a flag of freedom' while moving the resolution on the flag in the Constituent Assembly. And, for the first time in the long history of the nation, Indians could look up with pride and honour at their country's flag. However, to their utter dismay, ordinary citizens soon realized that they did not have the right to fly the Tiranga on all days of the year. The display of the National-flag was the exclusive privilege of certain senior government dignitaries as mentioned in the Flag Code of India. The Tiranga was perceived as a flag of government authority and not as the ordinary citizen's tribute to nationhood. It is heartening to note that from January 26, 2002, after fifty-five years of independence, Indian citizens were permitted to fly their National-flag throughout the year. This was the result of a long and protracted legal battle by Sh. Naveen Jindal, Hon'ble Member of Parliament. On January 23, 2004 in a historic judgment, the Honourable Supreme Court held that the right to fly the National-flag freely, with respect and dignity, was a Fundamental Right. The Tiranga has always been a great source of inspiration for all of us throughout our contemporary history. It reminds us of our duties towards our country. When a company flies the national flag at its office or factory premises, it becomes a source of genuine inspiration for the workers and the staff, who feel that they are working not just for the company or factory, but for the country as well. It is a symbolic way of placing national interest ahead of everything. When we hoist our National-flag, we rise above our religion, regional and political affiliations and show our love for the nation. We feel a sense of pride as the flag unfurls in front of our eyes to reveal its vibrant colours. Display of the Tiranga, our National-flag, is a way of expressing our love for, and faith in, our nation. 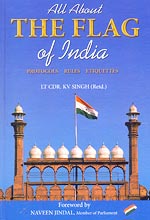 All About The Flag Of India

On 23 January, 2004, the Hon'ble Supreme Court of India in a historic judgement held the flying of the national flag as the fundamental Right of an Indian citizen. In simple words it means that we are now free to respectfully fly the National Flag at our homes, workplaces and other public areas, on all 365 days of the year, between sunrise and sunset. Although, the law of the land now permits us to freely display the Tricolour, most of us still have doubts and misgivings about the use of the national flag. At times, even well informed and educated people are unaware of their right to fly the Indian flag. The principle purpose of bringing out this handbook is to dispel these misgivings and remove all doubts related to the use of the national flag by common citizens. A sincere effort has been made to explain the rules, regulations, protocols and etiquettes to be followed while displaying the flag. Photographs and illustrations has been used to elucidate the information given in the book. The intent behind this effort is to encourage people to use the Tiranga as liberally as possible in tier daily life. I hope that readers will find this book informative and they will be motivated to spread the message of patriotism through common display of the flag. It has been a long journey for the Indian from its adoption in 1947 to its free display in Indian streets by the people of this country today. Our earliest memories of the flag perhaps go back to our childhood days when the Tiranga was hoisted on the Independence Day and Republic day in the school premises. We felt a sense of pride as the flag unfurled in front of our eyes to reveal its vibrant colours. Today, the Tricolour is closer to us, a constant reminder of the relentless spirit of our nation and a representative of the freedom we enjoy as Indian citizen.Finally I wish to acknowledge the valuable information given by Her Excellency Sujatha Singh, the High Commissioner of India in Australia on 15 August 1947. I also wish to that my editor, Arundhti Bhanot, who refined the manuscript and made it more readable. KV Singh 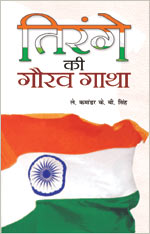 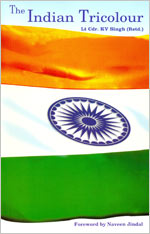 To those who love India and her flag, the Tiranga. Very rarely it happens that a country with rich diversity and heritage, replete with culture and ethnicity lacks something very basic, one which stands for its identity and so much more. This country was once, India and what it lacked was its National Flag for the longest of time. Hardly any Indian ever felt the need to have a Flag until the British invaded and there began the struggle for freedom. And this freedom today is symbolized by the Tiranga. The evolution of the Tiranga is unique and shall touch the hearts of every Indian. The sacred blood of our freedom fighters and every Indian who fought for our rights and independence is what this flag is symbolic of. How it played a major role in uniting Indians for the freedom struggle, to rise above the divide and rule created by the British, to let the flag fly high, always.