Unofficial flag of India in 1906

The hard truth of the pre-independence period is that India never had a National Flag that could represent it as one nation. There were flags of heroes and dynasties, rulers and warriors but not of India – the country. The need for having a flag wasn't really felt by Indians until the partition of Bengal was announced. That day was declared as the national day of mourning. A year later, on the anniversary of anti-partition movement a flag was unfurled.

The Berlin committee flag, first raised by Bhikaiji Cama in 1907

It was designed by Sachindra Prasad Bose. After the partition was annulled people forgot about the flag. Madam Bhikaji Rustom Cama who attended the 2nd International Socialist Congress in Germany gave a speech about the political fight with British and waved the flag.

The flag used during the Home Rule movement in 1917

It was made by Hem Chandra Das. Years later in 1917, during the Home Rule Movement Bal Gangadhar Tilak and Mrs. Anne Besant designed a flag.

The flag unofficially adopted in 1921

In 1921 Gandhi ji asked to plan for a national flag which was then designed by Pingley Venkayya.

The flag adopted in 1931. This flag was also the battle ensign of the Indian National Army

Gandhi ji was fascinated with the idea of having a 'Charkha' in the flag as it represented self reliance, progress and common man. It was also called the Swaraj flag, the Gandhi flag and the Charkha Flag. However, in 1931, a seven-member flag committee was established in Karachi to modify the flag. 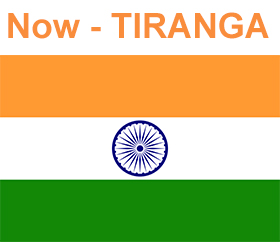 The big day for India came when Lord Mountbatten announced the decision to free India. The need to have a Flag that is acceptable to all parties was realized and an ad-hoc flag committee was headed by Dr. Rajendra Prasad to design the flag for free India. Gandhiji's consent was taken and Pingley Venkayya's flag was decided to be modified. Instead of the Charkha, the emblem on Ashoka's Sarnath pillar the wheel was decided upon. None of the colours had any communal significance. The National Flag was adopted on 22 July, 1947.